It’s October! My favourite month of the year! Not only because it’s my birthday this month, but it ends with Halloween! Ooooooooooooo!

So, in celebration of the spooktacular shenanigans to come, I’m doing a solid month of Ghosts and Gowns! Enjoy! 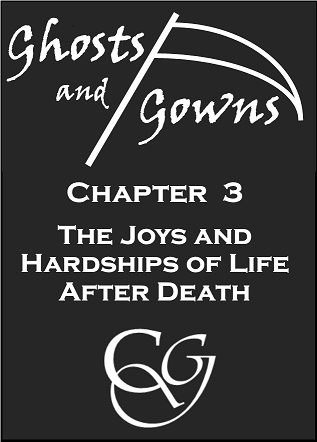 Professor Richards, Master of Devon College despite having ceased to breathe some three days ago, had found that there were several benefits for life after death.

You didn’t need to sleep, so there was far more time to Converse with people and Discuss Matters. He now had the opportunity to finally attend all those meetings he had previously had to miss owing to their unfortunate tendency to clash with his Afternoon Nap. On reflection, Richards wasn’t entirely sure that his presence at these meetings was completely welcomed by his colleagues who seemed to have been cooking up all sorts of outlandish plans in his absence but that only proved that he was an Invaluable Aid to them in their Troubled Times.

Another benefit was that since the dead were not known for their correspondence with the living, Richards had been able to drop any number of Disagreeable Acquaintances. Margaret, his treasure of an assistant, had frowned at him over her glasses when he had insisted she write to certain people with the Sad News of his Passing.

‘Professor! You can’t ask me to do that!’

‘You aren’t all that dead, Professor, are you? Certainly not so much as to cut all ties with them.’

‘I don’t see why we can’t stretch the truth just a tiny bit, Margaret! It isn’t as if you like answering the phone to them either!’

Margaret’s mouth twisted in that way she had when she knew she was beaten but intended to continue her stance as the Lone Defender of a Higher Standard of Professionalism in the office. Richards allowed himself to look just a little pleading at her.

‘It’s not as though we don’t have enough to do either, is it? No harm in cutting back a little, slowing down and such, eh?’

At this Margaret sighed in exasperation, looking over her blue-rimmed glasses at him as if he were a small boy rather than a man three decades her senior. Richards was always gratified to see spirit in those who had to keep him on the Straight And Narrow; it was good to see she wasn’t letting him down now he was in an Alternative State of Health.

‘Professor Horace Richards, you have never slowed down a day of your life. And don’t think you’re going to get away with this excuse every time you want to get out of anything either.’

Richards went to float through the wall to startle the Bursar’s assistant; she was much more likely to give him his way these days if it got him out of her office. Richards suspected her of having a spiritual bent, and was making the most of it until Margaret found out…

Nevertheless, Richards had to admit to himself later that day, there were a few downsides to his New Existence, and they almost all sprang from his sad tendency to pass through any and all solid matter he encountered. The result was that he was currently unable to do his research as he could neither hold his books nor turn their pages. He could do no paperwork either, which Richards had been momentarily pleased about for the first day until he realised that failing to actually do his job certainly would be grounds to remove him from it and there went his Entire Purpose in Life.

Margaret had refused – preemptively – utterly and completely to turn his pages for him throughout the day, although Richards did hasten to state that he had certainly not asked her to do Any Such Thing.

‘I should just like to make sure we are clear on this point, Professor.’ The Raised Eyebrow of Disapprobation was threatening, Richards could sense it. He resisted the urge to hide in the fireplace, but made a point of keeping out of her sight for the rest of the morning.

Although really, now that Richards thought about the Humiliation of having Margaret sit beside him and turn pages for hours on end, he veritably shuddered. Humph. As if Richards had need of such Pandering! What a thought!

Although speaking of Margaret, this reminded him…

He silently floated out of his office and into hers.

‘Can I help you, Professor?’

She always seemed to sense when he was there – he had not ascertained how she managed this yet, but he certainly intended too. What was the point of being a ghost if you were unable to frighten people At Will? The college Needed to Know if Margaret even could be scared; there were discoveries at stake here!

Richards came to an abrupt halt as Margaret skewered him with the probing stare of an especially patient predator. He gulped.

Margaret simply waited, looking at him over the rims of those infernal glasses.

‘Margaret…’ He began and then wondered how to articulate what had been worrying him. It would not do to simply Kick the Hornets’ Nest, now would it? (Margaret could never be allowed to find that he had applied such a metaphor to herself…)

‘Yes, Professor?’ She prompted after a pause.

‘You see, I have been thinking…’

‘Well, I think you have noticed that I am currently experiencing some… well, entirely temporary, of course, no question about it and such, but still… I am finding it harder to sign things and such. You may have noticed?’ He paused in his recitation to the upper corner of the office ceiling; there was a water mark in the shape of some continent that did not yet exist.

Margaret nodded when he caught her eye and looked both quietly sympathetic and of course entirely too professional to experience such emotions. Good woman.

‘Anyway Margaret, I have noticed that while the last three days have been a welcome break from the daily grind of the office and such, I cannot imagine how the place has not yet come crashing down around the old ears without me! I would hope that you would alert me should the Bursar finally have Seized the Moment for his planned coup, would you not?’

There was a moment of silence and Richards tried hard not to visibly adopt a defensive stance. However, rather than eviscerating his spectral form for the suggestion that Margaret were not fully capable of defending her Master of House from Bursorial Hostilities, as Richards had feared, Margaret only smiled at him, looking almost fond. And exasperated. Mostly fond though.

Richards must have caught her in a Moment of Weakness. He should treasure the memory for later.

‘There is no trouble, Professor. I have been signing your papers and such and there’s no College meetings until term starts in October after all. I can assure you that the Bursar has no notion that you are not functioning at exactly the same capacity as always, despite your recent transition.’

‘You’ve been signing my papers?’ Richards was incredulous! Mutiny in his own office! His own college! Under his very nose indeed!

Margaret flashed him a Quelling Look. ‘Not so loud, Professor, honestly someone will hear. It is indistinguishable from your signature after all. I should think that you would rather Questions were Not Asked, don’t you agree?’

Richards paused in his next statement of outrage at this. ‘Do you mean that- that you have been forging my signature?’ He whispered this last, as he Had Suspicions that Margaret had Ways of trapping unwary spirits. It was the sort of thing she was Likely to Know.

Margaret favoured Richards with one long look of Profound Patience.

‘Do you remember, Professor, that term when you had all those appointment panels to chair and the letters and contracts and such were building up in your in-tray because you had that paper to submit.’

‘I certainly should say that I do! Utterly tedious business…’

Margaret cut him off before he could reiterate his Full Thoughts on the Matter.

‘Yes, Professor, precisely. And then several people thought they must not really have been offered the job and we might have had to offer them to other candidates. And it seemed altogether easier to simply sign them for you to get it over and done with. So I did.’

Richards thought about this some more.

‘Do I want to know when you learned to forge my signature?’

Margaret just smiled and shooed him out of her office without another word.

Really, Richard thought, on consideration he would be Quite Lost without Margaret and her terrifying bank of skills, he really would.

But the original problem remained, Richards knew; there was really no getting away from it in the end.

Margaret was a Treasure, no doubt about that, but Richards had No Intention of being helpless for the rest of his (possibly limitless) days. He Really Must find a solution to this troublesome Insubstantiality Business.

Richards contemplated his office for a moment before settling his eyes on the papers which Margaret had placed on the central table the day before his Passing Over. The papers sheets were light enough that they would surely make a good starting-point. Richards mentally rolled his sleeves up and straightened his shoulders. He could do this. He must!

Margaret walked in to his office several hours later and stopped abruptly in the doorway. She silently regarded the flock of paper sheets swirling around Richards as he stood feeling Very Accomplished. He could now flip the pages in his books and move his pens to write (still a bit shaky but Improvement Would Come) but he had wanted to put on a proper show for his assistant.

Margaret’s lips twitched in a rare smile before she raised one slim eyebrow. ‘If you have destroyed my carefully organised system, Professor, I warned you that I shall not be responsible for my actions.’

Richards beamed at her without Undue Concern. She appeared to relax slightly in the face of his confidence. Good Woman.

‘Margaret! I am wounded! Wounded! That you would accuse me of such Tomfoolery! Indeed I am! Everything shall be as you left it in but a moment, I will have you know!’

And so saying, he waved one hand (although he was not yet certain if this had any impact – it added that Certain Style) and the papers whirled together, stacking themselves neatly in their original order before coming to rest gently on the table. Richards withheld a breath of relief – he had held a few doubts of that working. It was always gratifying to be successful in front of an audience.

Margaret was far too professional to do anything so emotive as roll her eyes in the manner of an undergraduate, and therefore she simply nodded.

‘See that you do, Professor.’

And then she left swiftly and without saying a word; she’d possibly seen the way Richards was eyeing up the bicycle in the corner. Margaret always had good instincts like that.

Now then… Richards flexed his fingers and got started. If he was quick enough to master moving objects from a distance the Bursar wouldn’t know what hit him…

Missed a chapter of Ghosts & Gowns? Find the whole series so far here.

One thought on “The Joys and Hardships of Life After Death”