A Kingdom for the Oak King

Right! Now on to the actual map-drawing!

(Note: If you’ve just stumbled into this post and are wondering what’s going on, please check out the series Masterpost for some form of context)

So waaay back before Easter I did a little series talking about turning some big figures of folkloric legend into real, believable characters, and one of those was Jack O’Green, or The Oak King. So I know what he’s like, but what of his kingdom?

Now, with a character like Jack, who’s effectively the God of Nature and Green Stuff, it would be really easy to just picture and reference a huge forest and call it a day, but try drawing a map of that place and I worry that it could get boring for readers (and writers!) really easily. There’s only so much to be said and inferred from trees, after all.

So, why do I need to draw this map?

Well, one of the reasons why I needed to start tackling The Oak and Holly Kingdoms first was because I am working off a blank sheet here.

See, when I sit down to do Tir na Nog for the Fairy Queen, with her Seelie and the Erlking’s Unseelie courts, I’ll have something to work from. There are stories that tell me something about what can be found in that kingdom, people travel there (more or less willingly) and items originate there. I have clues I can start to piece together into something I like. 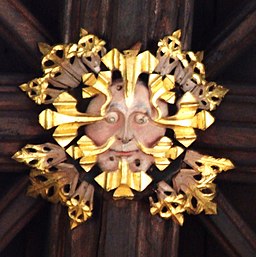 The Green Man, on the other hand… He just doesn’t have anything like that.

The Green Man is quite literally a ‘Figure of Folklore’ in that he is a lone person, a character, an image… and nothing else. I said before that there aren’t really stories about him, he’s not a major feature in any legends; he’s a bit like Tom Bombadil in that he shows up, dances and sings and feeds everyone good things and then waltzes right out of your life with nary a ripple.

He has no named castle or palace to live in, no one goes on a quest to bargain or steal a MacGuffin from him, he doesn’t kidnap a fair maiden away to his lands. He’s a figure in green who dances at May Day celebrations and he shows up in church carvings.

That’s not a lot to work from…

Now, there are some wonderful people out there who can work really well from a blank page, but I am definitely not one of them! I need some form of structure to hang my ideas off of, and so, to the drawing board we go!

The map doesn’t need to be especially detailed, or even close to what the kingdom will eventually look like.

When I don’t know what a place looks like, I just draw any and all options I can think of until I find one I like. It’s like a sped up form of evolution, where any ideas I think are especially good make it over from one draft to the next, and the weaker ones drop off until I have something I think works really well.

This map is not going to end up as a finished or final draft. It’s a first draft and all writers know what happens to first drafts! Mwahahahahaha!

So before I started drawing, I sat down and thought about what I could include in a kingdom dedicated to a Nature God. I thought to myself, ‘Well, hey, obviously plants, but there are plenty of plant-environments out there, let’s include as many as possible.’

Top Tip Time: When setting off on world-building missions, I watch a lot of David Attenborough. Nature came up with cool ideas long before we got hold of them, and seeing the huge scale and complexity of the world we live in helps me think of options I had simply not considered. Look at the themed shows; they’re different environments, areas that can support life which you might not have thought of, how specialised life has to be to survive in certain climates, and areas that will support a lot of lifeforms together.

So here’s a short list of the one’s I thought would go together well:

Those last two may seem a bit weird to include to you, but my rational was that there is still plant-life in both of these environments, and they are both fascinating and really tough. For a fairy-tale world rooted deeply in a sense of dark pragmatism, it seemed appropriate to include some of the toughest vegetation on the planet.

Also, I did think about including such things as rain-forests and mangrove swamps, but I wasn’t sure I could get everything onto one landmass and I just can’t quite see Jack O’Green, famously English folkloric figure hanging out in a rain-forest.

Right, so having gathered up my various different areas to be included, I needed to sketch out where and how they would fit together. I started at the top and bottom, putting in the desert in the South where it could be expected to be warmer, and the tundra in the north, which is appallingly Northern-hemisphere of me, and I now that people in Australia or New Zealand have a different experience. Sometimes you just end up going with what you know, but I’d be really interested in seeing a different take on fantasy maps that play around with the notions of compass directions and whatnot.

(I know that I can’t spell Deciduous, I’m sorry…

I write because spelling is hard!)

Anyway, you can see that I basically just squished what started out as circles of environment together into this overlapping mass of different lands. The idea being that all of these places would have their own cultures and peoples living there, but it still feels very much like one kingdom ruled by one person who has a specific ascetic going on.

I experimented a lot in this early stage with where to put things, and how big certain areas would be, and I was still tinkering with it even while moving the drawing onto the next stage! You’ll probably note that all my maps start out with this big slightly ugly sketching stage where I just play around with vague ideas until things start to feel right.

I recommend making all your early sketches look a little bit messy and unattractive – it makes throwing away a bad idea much easier than it will be if you put time and effort into making it look all pretty and fantastical, only to decide that you don’t like the ideas it’s illustrating so much now you’ve slept on it for a week.

Right! No more disembodied shapes, now to make it look like a real map!

First to draw a coastline, it’s not a very imaginative one, but this is only a first draft after all. I need to get better at this whole ‘wiggly line’ thing, because fighting my urge to just draw straight from A to B is not what coastlines are all about!

And to add in some mountain ranges to start dividing up the kingdom a bit. Not too much following of the old sketch-lines, but then again landscapes don’t tend to follow nice interlocking curves anyway.

A big mountain range to separate the desert part a bit, and a little off-shoot range to make the grass-lands look a bit more interesting. (No, I’m not avoiding drawing grass for ages, what are you talking about?)

Lots more mountains in the north, but I associate pine forests and heaths with mountains anyway, so I guess that makes sense. The marshland has been squished out a little, I may need to think about that a bit more…

Too much mountain? Possibly, but I like drawing mountain ranges, and I’m not all that great at trees on maps, so maybe that’s best for everyone! I need to put some serious practice into drawing forests at some point, but it is not this day.

Right, let’s turn all these elements into a proper map, shall we?

There’s rivers and lakes to be added, trees to put in and grass to draw. I put in some lighter lines on the mountains so they look prettier (I have priorities, you know, and mountains are all of them…)

Please excuse the terrible place-holder names! As everyone who’s read my Power of Names post knows, this is not an area I have a whole lot of imagination in at all!

Does anyone have any tips on how to draw swampland to look different from marshland? I had absolutely no idea, so it’s been left blank for a bit until I think of something! Any recommendations in the comments will be gratefully received!

I jotted in a couple of places I could imagine a city being positioned too, although taking a second look at this, none of them are near a good source of water, so the second attempt at this map is definitely going to be tackling this problem better!

Well, I once wrote a post, In Defence of Doing Nothing, which I swear wasn’t totally an advert for idleness! Essentially I believe in letting ideas sit for a bit before going back to them. Like with editing, it gives me a bit of distance to decide if I’m attached to an idea or not.

So there’ll be some other maps and whatnot, I’ll have a bit of a play around and do a bit more research to see if there’s any folklore that I think I can make off with and apply.

Then I’ll redraw the map, probably a bit larger. There were a few places on this draft that got a bit squished as I ran out of space, so a bit of extra space will be a bonus. It will also allow me to put more detail in, and think about what kind of settlements Jack O’Green’s lands would need or want.

As always, I hope that this was helpful to some of you and interesting at least for others!

If you did like this post, do check out the Chronicles in Creation series here, and if you have any cool ideas for The Green Man’s kingdom, please do drop me a note in the comments – it’s great to hear what other people think after all!

See you next time, everyone!