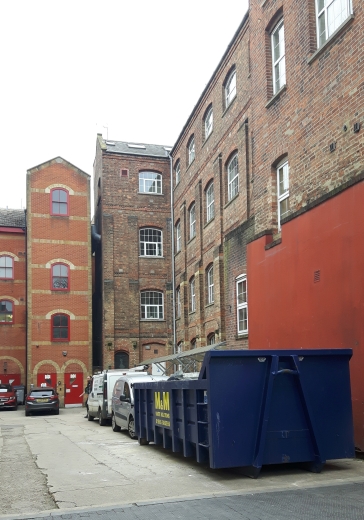 For those of you who are familiar with Oxford, you may recognise this photo as the alley at the back of the Clarendon Shopping Centre.

For those of you whop aren’t familiar with Oxford, let’s just say that it’s an alley I’ve walked past just about every day for at least seven years. There’s dozens of alleys just like it in every town and city in England and very probably around the world; nicely built at one point, but long-since forgotten about while the front facade gets updated every decade or so.

You’d think by now – this being Oxford and all – I would know better!

Yes, that is indeed an angel looking back over its shoulder at us like it’s in The Office, apparently 1000% done with the sea serpent. Look at them! You can absolutely hear the exasperation in the angel’s voice, can’t you?
Sidney, I say, Sidney will you stop flashing your fangs around? No really, they’re completely unnecessary, old thing. The poor artist’s already struggling to get your whole body in frame what with all the coils, do you think you could just… not?

I mean, why not have an angel and a sea serpent in your windows, right?

Makes complete sense, that does. 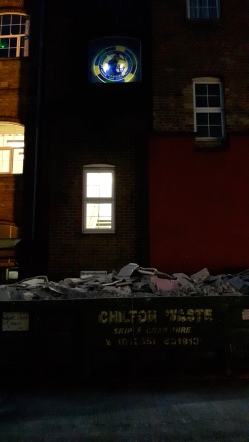 Naturally, I had to investigate a little further…

Sure enough, over top of the skip (because of course it was over the skip!) there was another stained glass window! It’s a little unclear, I know, what with being so high up, but I think that’s St George, mercifully without his dragon up there:

Yep, there he is! Valiant steed at the ready and everything!

Now, I know what you might be thinking: Cameron, why are we looking at this building? And fortunately, I do have an explanation which in turn explains so much about Oxford!

Because it has been my personal belief for some time now that there is a magical department hanging around somewhere in Oxford, even if I could never quite figure out where it might be. The Bodleian was too obvious, and besides, have you ever actually met an Oxford librarian? They are specially trained to take out a potential book-scribbler at a thousand paces! You even think about crumpling the pages and they will have your hide, never mind trying to do any magic around their books! Any of the museums are out for similar reasons, although one does also have to factor in the various Outreach activities to get kids into History they have going on: there’ll be no doing of magic while the PVA glue and glitter is right out, it doesn’t bear thinking about! 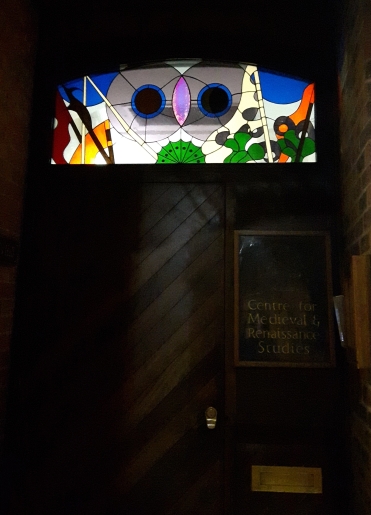 And at last! I have found it! It’s perfect! Right next door to a gardening and DIY shop too, which I’m sure will come very in handy for iron nails and oak wood and things. They probably have an extra room at the back with the cauldrons in…

After a bit more searching, I finally found the front door, and look! Definitive proof if I do say so myself!

I mean, if you were designing the head quarters of the Magical Faculty of Oxford University, what else would you stick over the door? Naturally it would be an owl!

Alright, so the sign next to the door says it’s the Centre for Medieval and Renaissance Studies, but that is just what you would say, isn’t it? What other crowd would be more at ease with magical undergraduates, huh? They’ll all have their cover stories at the ready; when they say that their DPhil topic is the correlation in accounts of dragons and witches in the 15th century, you’re not to know that either of these things really exist, are you?

I can’t tell you how much of a relief it is to have finally found confirmation of the Magic Faculty after all this time! And to have simply stumbled across it too! Mind you, isn’t that always the way it happens in the stories?

Coming to you next time with further wonders, miracles and mysteries of Oxford…