I know Saturday isn’t usually a posting day, but Ivan was really keen to celebrate St Patrick’s Day with you all! In honour of the occasion, I’ve allowed him to hoard my green folio books to get into the spirit. Especially since dragons do not wear clothes, and I’d hate for him to be caught without something green!

Truth be told, dragons often have mixed feelings about Saint Patrick, given how he drove their cousins and ancestors out of Ireland back in the day. To this day, Ireland has no serpents, either snakes or their relatives the dragons.

Nevertheless, Ivan is always fascinated by tales of his ancestors, regardless of how those stories tend to end, and so in honour of the day and of the dragons, I wanted to share with you all the story of Lig-na-Paiste, the Last Dragon of Ireland.

In Medieval Irish, Paiste translates to mean ‘pest’ or ‘beast’ but you can be well-assured that Lig-na-Paiste was far more than that! No, Lig-na-Paiste was a Go Hard or Go Home dragon; huge in size, some say eleven feet long with the horns of a ram and long fangs. His scales were the size of dinner plates, and he was seemingly so extra that he both breathed fire and produced a potent venom.

Lig-na-Paiste was ancient, a survivor from the times when the greatest and most terrible dragons were common-place all around the world. He was a cunning old beast, and when Saint Patrick was touring around Ireland and banishing the serpents forever, Lig-na-Paiste hid himself away, curled up in a small pool near the source of the Owenreach River in the Banagher Forest, so that Saint Patrick could not find him.

Years passed and Saint Patrick grew old and finally died, and Lig-na-Paiste thought that it was safe to come out again and cause trouble. He was hungry from hiding away for so long and he quickly gobbled up many of the local herds of cattle. The people were terrified, but they soon heard tale of another holy man, Saint Murrough. Perhaps this man could help save them from the Lig-na-Paiste?

Saint Murrough was a wise man as well as a holy one, and made careful preparations before tackling such  powerful creature. He fasted for nine days and nine nights, and he took with him three wooden rods. Then he travelled to Lough Foyle, where Lig-na-Paiste had been sighted.

When Lig-na-Paiste caught sight of Saint Murrough, he laughed to himself, for he was so old that he remembered a time when dragons were appeased by sacrifice so that they might not need to go raiding livestock themselves. He called out and ask Saint Murrough if he had come as a sacrifice, and Saint Murrough did not answer, but only continued to walk quietly forwards.

Finally the two met face to face, and Saint Murrough asked if first, before Lig-na-Paiste began to eat him, the holy man might place the three wooden rods upon Lig-na-Paiste’s huge back?

The dragon did not wish to seem unfeeling, and assuming that this was some new religious practice he was unfamiliar with, said that he did not think that it would cause him any great inconvenience to allow the request. The saint came forward and placed the rods on the dragon’s back, but no sooner had the third rod but put into place, they sprang o life and wrapped themselves around the dragon’s body, trapping his arms and legs so that the beast could no longer move at all!

Then Saint Murrough began to pray fervently, as he had never prayed before in all of his holy life. He asked God that the wooden rods should become as hard and as strong as iron, stronger even, and that Lig-na-Paiste should never be able to escape them.

The dragon raged, and declared that he had been tricked by the man, but the saint would not free him. For Lig-na-Paiste was as cruel and deceptive a creature as had ever been seen, and so he could not be trusted to keep his word about better behaviour in future.

The Lig-na-Paiste continued to struggle, but Saint Murrough said that though the dragon’s strength be great indeed, the strength of the Lord was greater yet.

Finally Saint Murrough banished Lig-na-Paiste down into the waters of Lough Foyle, where he remains to this day. Some say that they can still see the waves on the surface of Lough Foyle moving in strange ways, with unusual tides and currents, and they know that this is caused by Lig-na-Paiste moving around and struggling against his magic bonds.

But he will never be free, not until Judgement Days comes to the world, and by that time, I suppose that it will not matter much that he is freed… 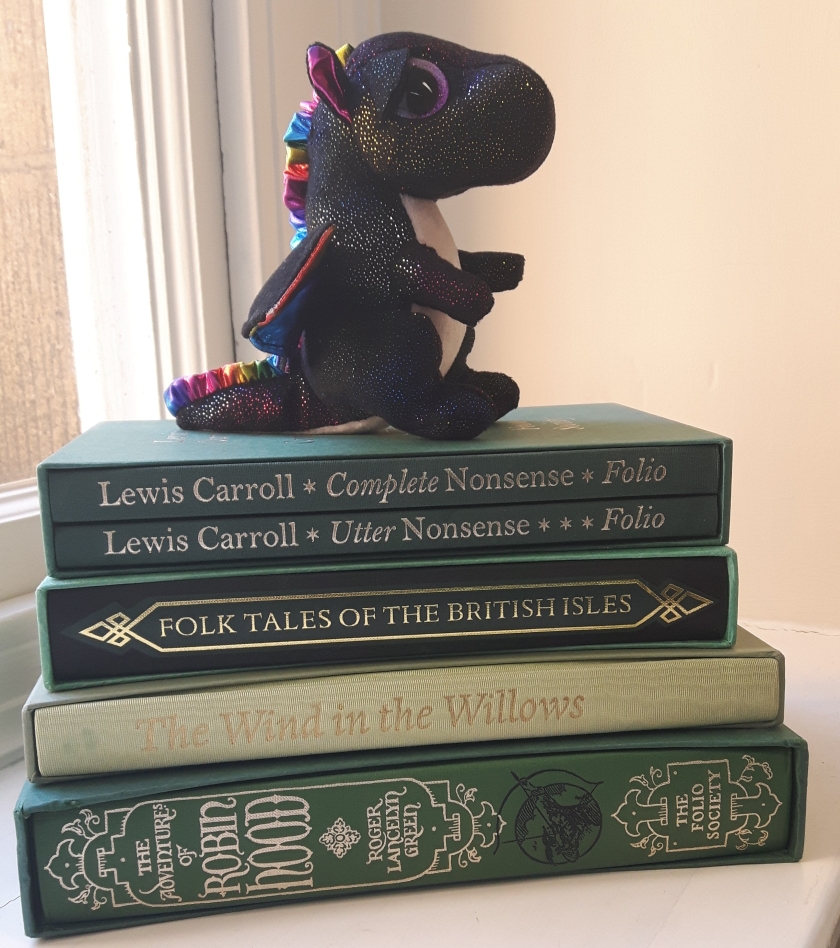 Sadly no books directly from Ireland, but fun all the same!

Thank you to Sophie, who told me the story of Lig-na-Paiste when I asked for a good Irish story and dragons! I hope I retold it well enough!

If you’d like to see more pictures of Ivan the Wyvern as he gets used to his new home, check out the rest of the series here.

Sooo… So I think Ivan heard somewhere that dragons are the world’s greatest hoarders, and he seems keen to get some practice in early!

To be fair to him, he does seem to have an affinity for the most bright and colourful of all my stationary. He looks pretty proud of his tiny hoard, doesn’t he?

It almost seemed a shame to confiscate all my stationary back at the end of the day, but needs must! Hopefully Ivan can find something else to guard for a while…

You can keep up with The Many Adventures of Ivan the Wyvern here!